Sadly, Rick Frykberg passed away yesterday morning at the age of 63. He was the Chief of the Division of General Surgery at the University of Florida and Shands Hospital in Jacksonville, Florida. Rick was a Professor of Surgery and was a great educator and clinician. He did his internship at NYU Medical Center in New York, and completed his residency at the Medical University of South Carolina. From there he became a staff surgeon at the US Naval Hospital in Jacksonville. He then joined the faculty at the University Medical Center and stayed there for the rest of his career. 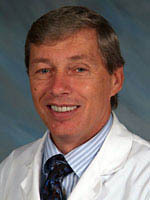 Rick was very active in the trauma community and was a member of AAST and EAST. He joined both organizations in 1988 (!), and was elected to the board of directors of EAST in 1996. From there he moved up and was elected president of the EAST in 2001. Rick generated a robust body of research, with much of it focused on the area he became known for, vascular injury. He also had interested in disaster medicine and breast surgery.

Rick will be missed by his family, colleagues, and trainees.