Regardless of the exact mechanism for the development of fat embolism syndrome, in trauma it most commonly occurs when the medullary (bone marrow) cavity of a long bone is violated. This occurs first when the bone is fractured, and again when it is instrumented for fixation. The initial shower of emboli cannot be prevented. However, ongoing emboli can be reduced with early fixation. This can be in the form of a good splint, or surgical external or internal fixation.

One type of internal fixation, intramedullary (IM) nailing, has been associated with embolism and FES for some time. This technique was introduced 80 years ago and has been refined significantly since. Here is a picture of a femur with an IM nail. 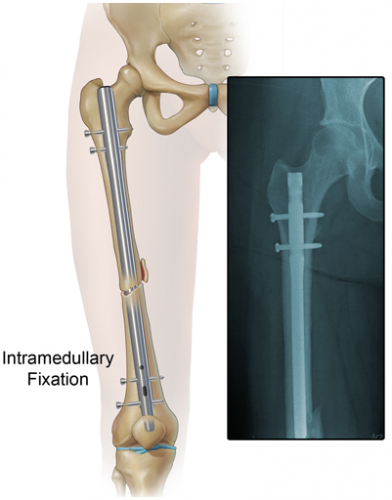 The nail is inserted proximally near the greater trochanter. The marrow cavity is first reamed to make insertion of the nail easier. This causes a number of changes in the physiology of and pressures within the marrow cavity. Pressure increases during the initial reaming, and hits a peak when the reamer enters the distal fragment. Once complete, there are no further increases as the nail is inserted. However, these pressure changes alter medullary blood flow and allow emboli to enter the venous system.

Reaming is actually beneficial in several ways. It simplifies and shortens the surgical procedure. And in animal models there is evidence that bone debris from the reaming process collects at the fracture site, creating an autograft that may improve healing.

A surgical group in Ireland has been using a novel technique for lavaging the marrow cavity during fixation for several years. Once the bone is entered proximally, a cut piece of suction tubing is inserted into the end of the bone. Suction is then applied for 2-3 minutes. The procedure continues, including reaming, then the suction procedure is repeated. Unfortunately, FES is uncommon, so it is difficult to judge whether their technique really works. The authors believe it is safe, but recommend formal studies to prove efficacy.

Use of an additional venting hole between the trochanters has also been studied in a small randomized trial. This allows for drainage of marrow during the reaming process, reducing any pressure rise. The number of embolic events detected using transesophageal echo was significantly reduced in the vented group (20% vs 85% of patients).

Next, prevention and treatment of fat embolism syndrome.