The quiz presented a single slice from a pelvic CT, asking for mechanism, age and diagnosis. So here’s how to do it. First, what’s wrong in the picture? A number of you picked this one out. The right buttock area has a large hematoma present, and there is a contrast blush posteriorly. This is an injury to the gluteal artery with active extravasation.

Next, look at the rest of the image. Not a whole lot to see, but there is significant calcification of pelvic arteries. So this patient is elderly.

Finally, what happened? Elderly people who have gluteal artery injuries are typically pedestrians struck by a car. Most other blunt mechanisms don’t have enough energy to do this.

And what about treatment? Sometimes in younger patients, the bleeding will stop, but don’t count on it. And in the elderly, it almost never does. Angioembolization is the best way to treat this problem, because surgical exploration is generally a bloody mess.

Piece of cake! Congrats to the readers who got this one right!

Great questions, and I’d love to answer in detail. Please contact me by email (see my profile at the side of the page) so we can chat!

So far, no correct answers to all three questions from yesterday’s pop quiz! Given the scan below, I want to see if you can figure out:

And bonus points for the correct answer on how to treat the problem!

Hint: You can tell the age by the appearance of the blood vessels in the pelvis. And the bright areas outside the pelvis may not be calcium. This should give you enough information to figure out the rest. 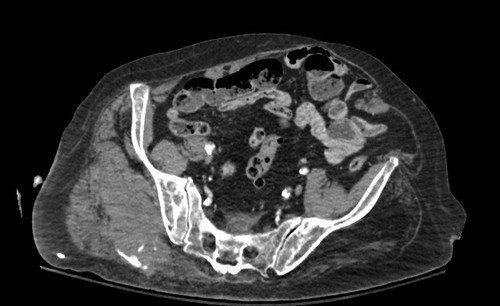