Recently, a Chinese man was in the news after having a four inch knife blade removed from his head after four years. What is the best way to deal with a problem like this?

This patient had a knife blade break off after he had been stabbed under the chin. It remained partly within the nasopharynx and the tip came to rest behind his left eye. His symptoms included headaches, stuffy nose and bad breath. The picture below shows the badly corroded blade in front of some of his radiographic images. 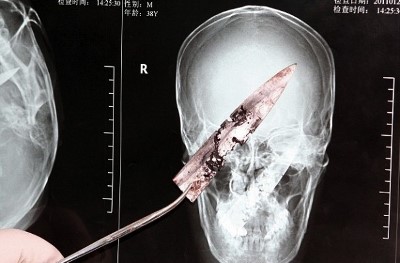