Simple penetrating injuries to the arms and legs are often over-treated with invasive testing and admission for observation. Frequently, these injuries can be rapidly evaluated and disposed of using physical examination skills alone.

Stabs and low velocity gunshots (no rifles or shotguns, please) should be thoroughly examined. This includes an examination of the entire, unclothed body. If this is not carried out, there is a risk that additional penetrating injuries may be missed.

For gunshots, look at the wounds and the estimated trajectory to try to demonstrate that the object stayed clear of neurovascular structures. This exam is imprecise, and must be accompanied by a full neurovascular exam and evaluation of the bones and joints. If there is any doubt regarding bony involvement, plain radiographs with entry markers should be performed. Any abnormal findings will require more in-depth evaluation and inpatient admission.

The final test that must be performed before discharge is a function test. If the injured extremity is too painful to use or walk on, the patient may need to be admitted for pain management and therapy. Patients managed in this way can avoid arteriography, CT angiography or admission and save thousands of dollars in hospital charges.

There is an increasing public interest regarding exposure to medical radiation. It represents the major exposure source for the population at large. There may be a presumption on the part of medical providers that “what you can’t see can’t hurt you” but this is just not the case.

A number of studies have shown that there is risk association with repeated exposure to xray. This risk is particularly important when dealing with pediatric patients. It’s time to start critically looking at our imaging practices and to start critically thinking about every one that we order.

One common source of repeat radiation is the repetitive CT scans of the head that patients who suffer TBI undergo. Frequently, there is little rhyme or reason to the patter of these scans. Should we repeat in 6 hours? 24 hours? When any lesions finish evolving?

It turns out that there is a reasonable amount of guidance in the brain literature. For the most part, they suggest that patients who are not in an ICU only need a repeat CT if their mental status changes. Any others obtained did not result in any management change. The first 6 papers listed below agree with this.

However, number 7 is interesting. It was published in the Journal of the American College of Surgeons and was a retrospective study of patients seen at a Level I Trauma Center. All patients had a lesion seen on initial scan, and underwent repeat scanning. The authors found that 6% of their patients underwent a surgical or medical “intervention” based on changes on the repeat head CT. What troubled them the most was that 21 of these 51 patients did not have any substantial neurologic change. They conclude that routine repeat head CT is very useful.

The bottom line: Repeat head CT is probably not needed in patients with mild TBI who are not on anti-coagulants or anti-platelet agents. However, regular mental status checks and GCS measurements must be taken.

A contrast blush is occasionally seen on abdominal CT in patients with solid organ injury. This represents active arterial extravasation from the injured organ. In most institutions, this is grounds for call interventional radiology to evaluate and possibly embolize the problem. The image below shows a typical blush.

This thinking is fairly routine and supported by the literature in adults. However, it cannot be generalized to children!

Children have more elastic tissue in their spleen and tend to do better with nonoperative management than adults. The same holds true for contrast blushes. The vast majority of children will stop bleeding on their own, despite the appearance of a large blush. In fact, if children are taken to angiography, it is commonplace for no extravasation to be seen!

Angiography introduces the risk of local complications in the femoral artery as well as more proximal ones. That, coupled with the fact that embolization is rarely needed, should keep any prudent trauma surgeon from ordering the test. A recently released paper confirms these findings.

The only difficult questions is “when is a child no longer a child?” Is there an age cutoff at which the spleen starts acting like an adult and keeps on bleeding? Unfortunately, we don’t know. I recommend that you use the “eyeball test”, and reserve angiography for kids with contrast extravasation who look like adults (size and body habitus). 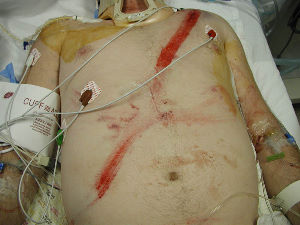