Deer hunting season is upon us again in Minnesota and Wisconsin, so it’s time to plan to do it safely. Although many people think that hunting injuries are mostly accidental gunshot wounds, that is not the case. The most common hunting injury in deer season is a fall from a tree stand.

Tree stands typically allow a hunter to perch 10 to 30 feet above the ground and wait for game to wander by. They are more frequently used in the South and Midwest, usually for deer hunting. A  study by the Ohio State University Medical Center looked at hunting related injury patterns at two trauma centers.

Half of the patients with hunting-related injuries fell, and 92% of these were tree stand falls. Only 29% were gunshots. And unfortunately, alcohol increases the fall risk, so drink responsibly!

Most newer commercial tree stands are equipped with a safety harness. The problem is that many hunters do not use it. And don’t look for comparative statistics anytime soon. There are no national reporting standards. No matter how experienced you are, always clip in to avoid a nasty fall!

The image on top is a commercial tree stand. The image below is a do-it-yourself tree stand (not recommended). Remember: gravity always wins! 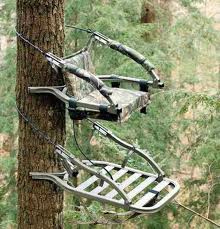 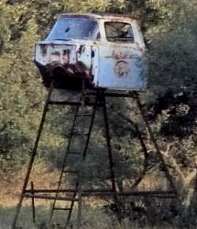 Who needs to get these vaccines? Obviously if your patient’s spleen was surgically removed, they should get it. But what about patients who underwent angioembolization? Unfortunately, the only data available is either very old or is based on antibody response to the vaccine. And antibody titers do not predict immunity to infection, so these studies are close to meaningless.

Old research showed that the spleen’s immune function was preserved as long as 50% of its blood flow was delivered through the splenic artery. How can you tell if half of the spleen is still functioning after splenic angioembolization? Look at the images and make an educated guess. If in doubt, vaccinate.

When is the best time to vaccinate? There has been much gnashing of teeth regarding early vs late vaccination. The arguments against early vaccination center around the typical immune suppression seen with major trauma. However, trauma patients frequently do not appear for all their followup visits and would not receive vaccines at all if they are a no-show. So I recommend vaccinating as early as possible during the hospital stay to avoid forgetting. The data recommending waiting until just before discharge are also based on antibody titers, and I don’t buy it.

Bottom line: I’m not an epidemiologist. But making a set of vaccination rules more complicated for a complex population seems unwise. Especially since the added vaccine offers protection for only one more serotype of Pneumococcus.

But I can’t argue with the FDA and CDC. I have no idea of the wheeling and dealing that occurred to get the new vaccine approved. All we can do is follow the recommendations the best we can, and try to remind our patients to get that Pneumovax and meningococcal conjugate booster five years down the road. Good luck with that.

Earlier this year, there were a lot of television commercials for Prevnar 13, a 13-valent pneumococcal vaccine for immun-ocompromised or asplenic adults. And interestingly, I noticed that the CDC has added a recommendation that these patients receive this vaccination, followed by the original 23-valent vaccine (Pneumovax 23) 8 weeks later.

WTF? Patients with splenectomy (or significant angio-embolization) for trauma are considered functionally asplenic. And although the data for immunization in this group is weak, giving triple vaccinations with pneumcoccal, H. flu, and meningococcal vaccines has become a standard of care.

This was difficult enough already because there was debate around the best time to administer: during the hospital stay or several weeks later after the immune system depression from trauma had resolved. The unfortunate truth is that many trauma patients never come back for followup, and so don’t get any vaccines if they are not given during the hospital stay.

And then came the recommendation a few years ago to give a 5-year booster for the pneumococcal vaccine. I have a hard time remembering when my last tetanus vaccine was to schedule my own booster. How can I expect my trauma patients to remember and come back for their pneumococcal vaccine booster?

So what do we do with the CDC Prevnar 13 recommendation? If we add it, it means that we give Prevnar while the patient is in the hospital, and then hope they come back 8 weeks later for their Pneumovax. And then 5 years later for the booster dose. Huh?

So I decided to dig deeper and look at the serotypes included in each vaccine. They are shown in the chart below. The 23 bars with maroon in them (solid or striped) are Pneumococcal serotypes covered by Pneumovax 23. The 13 bars containing gray are ones covered by Prevnar 13. There is only one serotype in Prevnar 13 not covered by Pneumovax 23, serotype 6A. Unfortunately, it’s nearly impossible to find the prevalence of infections by serotype, and it varies geographically and over time anyway. So does cover-age of a single extra serotype by Prevnar 13 justify an additional vaccination and complicated administration schedule? Hmm.

It turns out that there is one significant difference between these two vaccines. Pneumovax 23 is a polysaccharide vaccine made up of fragments of polysaccharide from pneumococcus cell walls. Prevnar 13 is a “conjugated vaccine,” meaning that the polysaccharides are linked to a protein. This is thought to increase the immune system response to the vaccine.

In my next post, I’ll try to make sense of this mish-mash and offer some thoughts on how to decide what to do for your patients.

Traditionally, most centers keep their solid organ injury patients in bed and NPO for a period of time. I suspect that they feel that walking may cause the organ to break and require operation. And if they need emergency surgery, shouldn’t they have an empty stomach?

Now let’s think about this. The success rate of nonoperative management for liver and spleen injuries in properly selected patients is somewhere between 93% and 97%. It’s been years since I’ve had a failure while the patient was in my hospital. And since we treat about 200 of these per year, I will be starving and restricting ambulation in a lot of patients just in case that one failure occurs.

The group at LA County – USC recently published a prospective, observational study of their 20-month experience comparing early ambulation vs delayed ambulation after liver, spleen, or kidney injury. They admitted 246 patients with these injuries, but excluded those who couldn’t walk, walked out against medical advice, died, or underwent operative intervention or angiography.

Bottom line: This is a very small study, but it dove-tails with my personal experience. We removed activity restrictions and NPO status from our solid organ protocol two years ago and have not noted any complications while in the hospital.

Most trauma professionals have heard of OPSI, but few have ever seen it. The condition was first described in splenectomized children in 1952. Soon after, it was recognized that this infection occurred in asplenic adults as well.

OPSI is principally due to infection by encapsulated organisms, those with a special polysaccharide layer outside of the bacterial wall. This layer is only weakly immunogenic, and confers protection from the normal immune mechanisms, particularly phagocytosis. However, these bacteria are more easily identified and removed in the spleen.

OPSI may be caused by a number of organisms, the most common being Strep. pneumonia, Haemophilus influenza, and meningococcus. For this reason, the standard of care has been to administer vaccines targeting the usual organisms to patients who have lost their spleen.

How common is OPSI? A recent paper from Gernany reviewed comprehensive data from 173 intensive care units over a 2-year period. Here are some of the more interesting factoids:

Bottom line: Yes, OPSI exists and can occur in your asplenic patients. It is uncommon enough that you and your colleagues will probably never see a case. But proper vaccination remains important. Papers consistently show that we are collectively not very good at ensuring that our splenectomized patients receive all their vaccines, ranging from only 11-50%. We collectively need to make better efforts to provide them to our at-risk patients.