Trauma professionals frequently have to leave bullets in patients. It is often more disruptive to go digging the projectiles out than to just leave them in place. But patients always want to know why and what the consequences might be.

In my last post, I discussed a very old paper on what we know about lead levels and retained bullets. Very recently, a meta-analysis was published that provides a better picture of this topic. They somehow managed to find over 2000 articles dealing with lead toxicity and bullets out there. But after someone had the pleasure of reviewing each of them, they found only 12 that had any meaningful or actionable information.

Bottom line: Even using meta-analysis, it is difficult to tease out meaningful answers to this question. That speaks to the low numbers of papers and their quality. However, this study does provide a little bit of guidance.

Retained bullet fragments are probably not a big worry in most patients. The bothersome cases are those where the fragments are in or near a bone or joint. And even though few patients actually developed lead toxicity, lead levels approaching 5 micrograms/dL can have physiologically significant negative effects.

Recommendation: If your patient has a retained bullet fragment near a bone or joint, or they have “multiple” retained fragments (no good definition of this), they should have blood lead levels measured every three months for a year. If the level is rising, and certainly if it reaches the 5μ/dL level, attempts should be made to remove the fragments.

This is a fairly common question from victims of gunshots and their families. As you know, bullets are routinely left in place unless they are superficial. It may cause more damage to try to extract one, especially if it has come to rest in a deep location. But is there danger in leaving the bullet alone?

One of the classic papers on this topic was published in 1982 by Erwin Thal at Parkland Hospital in Dallas. The paper recounted a series of 16 patients who had developed signs and symptoms of lead poisoning (plumbism) after a gunshot or shotgun injury. The common thread in these cases was that the injury involved a joint or bursa near a joint. In some cases the missile passed through the joint/bursa but came to rest nearby, and a synovial pseudocyst formed which included the piece of lead. The joint fluid bathing the projectile caused lead to leach into the circulation.

The patients in the Parkland paper developed symptoms anywhere from 3 days to 40 years after injury. As is the case with plumbism, symptoms were variable and nonspecific. Patients presented with abdominal pain, anemia, cognitive problems, renal dysfunction and seizures to name a few.

Bottom line: Any patient with a bullet or lead shot that is located in or near a joint or bursa should have the missile(s) promptly and surgically removed. Any lead that has come to rest within the GI tract (particularly the stomach) must be removed as well. If a patient presents with odd symptoms and has a history of a retained bullet, obtain a toxicology consult and begin a workup for lead poisoning. If levels are elevated, the missile must be extracted. Chelation therapy should be started preop because manipulation of the site may further increase lead levels. The missile and any stained tissues or pseudocyst must be removed in their entirety.

Granted, this is a very old paper. Over the years, a few papers on the topic have popped up from time to time. In my next post, I’ll review a meta-analysis on this topic that was published just last year.

Penetrating trauma has been increasing over recent years, especially here in sleepy St. Paul MN. On occasion, we all see patients who have sustained gunshots that have caused fractures. The persistent question has been: open fracture or not?

Do these patients need antibiotics? A wound washout? Are they at risk for lead poisoning? Unfortunately, there are no consistent answers in the textbooks. The orthopedic trauma group and MetroHealth in Cleveland sent surveys to 385 members of the Orthopedic Trauma Association (OTA) to see if there was some consensus.

A total of 173 of the surveys were completed, which is actually a very good success rate.  About 72% were in practice at a Level I center, 18% at a Level II, and 10% at Level III/IV or non-trauma centers.

There was considerable heterogeneity among the responses. Here are the summaries for the specific questions asked:

How would you treat a gunshot injury near bone without fracture?

The majority of respondents recommended non-operative treatment and some form of antibiotics. However, there was no consensus regarding route of administration or duration. About 75% were in favor of a single dose of IV antibiotics, and half of those also recommended addition oral antibiotics. The presence of a retained bullet did not change management.

How would you treat a gunshot with a stable fracture to the fibula?

How would you treat a gunshot traversing the  knee joint with a retained bullet?

About half stated they would explore the joint and the other half would not. Nearly all recommended antibiotics, with the majority in favor of a single dose IV followed by some duration of oral.

Is the union rate of a tibial shaft fracture from a gunshot treated surgically different than a non-gunshot fracture?

What about a gunshot with a displaced tibia fracture without other skin wounds?

How would you handle a gunshot traversing bowel that results in a stable pelvic fracture?

There was no agreement here at all. The majority (61%) would not debride the fracture, but would recommend IV antibiotics. Most of those recommended at least 24 hours of coverage. The remaining surgeons recommended surgical debridement, and were evenly split over brief vs longer antibiotic duration.

Bottom line: This is a “How we do it study” that is based on science as interpreted by these orthopedic surgeons. In general, OTA members behave as if they consider gunshots to bone as open fractures. More than 90% recommend antibiotics any time a bullet touches the bone. But once the fracture requires operative management, it is treated like a non-gunshot fracture from the standpoint of debridement and antibiotics.

The most interesting part of this survey was the total lack of consistency in the answers. It is clear that there is wide variation in the practice patterns of these surgeons, which usually signifies a lack of good data pertaining to the problem.

In my next post, I’ll discuss the lead poisoning question I mentioned above.

Initial CT scan evaluation for blunt trauma patients is fairly standardized. The usual palate consists of scans of the head, cervical spine, chest, abdomen and pelvis. Some choose their “colors” individually, and others just slop everything on the canvas.

Another study that is occasionally needed but many times unnecessarily ordered is the dedicated CT of the facial bones. This study spans the entire area from mandible to frontal sinus and is performed using finer cuts to display greater detail. 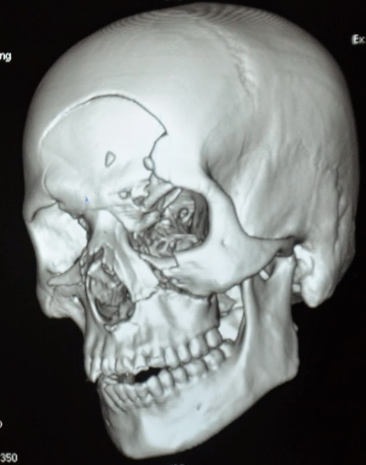 The unfortunate truth is that a large number of dedicated facial CTs either do not show fractures, or show fractures that don’t require operation. The scan does deliver a nice dose of radiation, though. Is there any way to be more selective about ordering it?

About 10 years ago, a plastic surgery group in Madison developed what came to be called the “Wisconsin criteria” for ordering facial imaging.  Here they are:

The authors claimed 97% sensitivity and 2.6% missed fracture rate, although external validation suggested those numbers were a bit generous. The Plastic Surgery group from the University of Minnesota and Regions Hospital recently re-studied these criteria with a large number of patients, looking at accuracy as well as cost-savings.

They performed a retrospective review of 1000 patients (based on a power analysis) who had a facial CT and adequate documentation of the Wisconsin criteria in the chart. Here are the factoids in table form:

Bottom line: What to do? It’s clear that using the absence of any of the Wisconsin criteria to avoid a facial CT scan is helpful. This makes sense, because 4 of the 5 criteria are findings on facial exam. But it also means that a lot of scans will still get done for low sensitivity criteria.

How about this? Since nearly all of these patients will have head and cervical CT scans, review the head scan first for facial fractures. Single, non-displaced fractures are nearly always nonoperative in nature. If patterns of fractures are present, or there are significant displacements, a dedicated facial scan will be very helpful in determining operative management.

But remember, the head CT does not include the mandible. A good physical exam and occlusion check is mandatory, and any suspicion of injury should prompt a full scan of the face.

Thanks to Chris Stewart, the lead author on this study for sending it to me for review.

Rreference: Validation of the “Wisconsin criteria” for obtaining dedicated facial imaging and its financial impact at a Level I trauma center. Craniomaxillofacial Trauma & Recon 13(1):4-8, 2020.

Yes, this is another one of my pet peeves. During a trauma activation, we all strive to adhere to the Advanced Trauma Life Support protocols. Primary survey, secondary survey, etc. Usually, the primary survey is done well.

But then we get to the secondary survey, and things get sloppy. 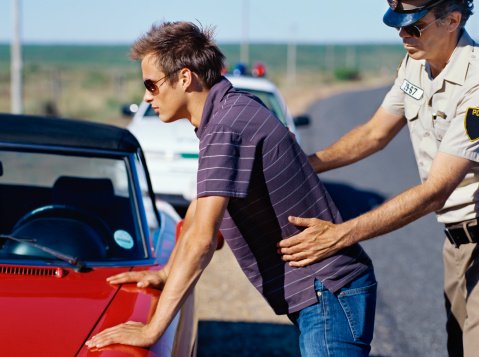 The secondary survey is supposed to be a quick yet thorough physical exam, both front and back. But all too often it’s quick, and not so thorough. There is the usual laying on of the hands, but barely. Abdominal palpation is usually done well. But little effort is put into checking stability of the pelvis. The extremities are gently patted down with the hope of finding fractures. Joints are slightly flexed, but not stressed at all.

Is it just a slow degradation of physical exam skills? Is it increasing (and misguided) faith in the utility of the CT scanner? I don’t really know. But it’s real!

Bottom line: Watch yourself and your team as they perform the secondary survey! Your goal is to find all the injuries you can before you go to imaging. This means deep palpation, twisting and trying to bend extremities looking for fractures, stressing joints looking for laxity. And doing a good neuro exam! Don’t let your physical exam skills atrophy! Your patients will thank you.