There are two broad categories of things that kill trauma patients. No, I’m not talking about violent penetrating injury, falls, car crashes, or any other specific mechanisms. I am referring to the end events (on a macro scale) that take their lives.

These two basic killers are: hemorrhage and brain injury. The vast majority of the time, a dying trauma patient has either suffered a catastrophic brain injury, or has ongoing and uncontrolled bleeding.

The Second Law Of Trauma

Your trauma patient is bleeding to death until you prove otherwise.

Obviously, there are a few uncommon exceptions to this rule. This includes sources of obstructive shock such as tension pneumothorax and tamponade. But by and large, you will find this law a solid one.

Bottom line: Since there is little we can do above and beyond the basics in the ED for severe brain injury, your focus must be on hemorrhage. There are lots of things we can do about that, and the majority involve an operating room. Always assume that there is a source of hemorrhage somewhere, and it just hasn’t shown itself yet. There can be no rest until you prove that the source does not exist. And hopefully, you do that very, very quickly.

Let’s get started with the Laws of Trauma!

After pursuing any discipline for an extended period, one begins to see the common threads and underlying principles of their area of expertise. I’ve been trying to crystallize these for years, and today I’m going to share one of the most basic laws of trauma care.

The First Law of Trauma

Any anomaly in your trauma patient is due to trauma, no matter how unlikely it may seem.

Bottom line: The possibility of trauma always comes first! It is your job to rule it out. Injury can and does kill people more quickly that an MI or a stroke, especially if it was never suspected.

Only consider non-traumatic problems as a last resort. Don’t let your non-trauma colleagues try to steer you down the wrong path, only to have your patient suffer.

It’s been five years since I published my Laws of Trauma, and it’s time to dust them off again. In the meantime, I’ve added a couple of new ones.

But before I start publishing them next week, I’d like to take a moment to share “McSwain’s Rules of Patient Care.”  I met Norm McSwain when I was junior faculty at the University of Pennsylvania. As so many of his era were, he was larger than life. He was friendly, outgoing, animated, and a real champion for quality trauma care.

Norm was a skilled surgeon and teacher, but his achievements were felt far outside his home in Louisiana. He was an early member of the ACS Committee on Trauma, and was very involved in the development of the Advanced Trauma Life Support and Prehospital Trauma Life Support courses. He is credited with developing the original EMS programs in both Kansas, where he took his first faculty position out or residency, and in New Orleans, his home for the remainder of his life. He spent his career at the Charity Hospital there, weathering multiple political storms over the years, as well as the big one, Hurricane Katrina. He was instrumental in achieving Level I Trauma Center status for its replacement, Interim LSU Hospital.

Norm’s accomplishments are, as many of his contemporaries who have left us, too numerous to count. I certainly won’t try to recount them here. But it was his charm, his love for his charges, and his willingness to teach every trauma professional that will always be remembered.

I’ll leave you with his 18 rules of patient care. They are timeless, and will serve you well regardless of your degree and level of medical training.

Recommendations for open fracture management has evolved over the past 20 years. The old-timey rule used to be: all open fractures need to be treated within 8 hours. This treatment could be washout and ORIF, washout and external fixation, or just washout alone. The washout was the constant across all types of management.

Then the orthopedics literature began to suggest that “lesser” fractures (Gustilo I – II) could go a bit longer. Some centers extended their required time to washout up to 12 or even 16 hours. Subsequently, the value of early IV antibiotics was recognized, and the time to washout started to change again.

There are two recent papers that seem to provide conflicting recommendations regarding antibiotics. The first is in process for publication by the ortho group at San Francisco General Hospital. They studied 230 open fracture patients at their Level I Trauma center over a five-year period. They monitored for surgical site infection that occurred during the first 90 days after injury.

But there was another paper published in the same journal this year that shows the opposite result. This one is from the University of Bristol in the UK. This one reviewed only Gustilo Type III fractures and observed changes in the deep infection rate, before and after the National Health Service guidance on antibiotic administration changed from within three hours to one hour post-injury.

Some more factoids for you:

Bottom line: So what gives? Two different answers: antibiotics given after 2 hours is associated with an increased risk of infection, vs no difference?

No, not really. Talk about apples to bananas. The first study looks at all open fractures, not just the most severe. It does not really define “surgical site infection,” so can we assume it was any infection? We don’t know. The second study looked only at deep infections.

The sample sizes are marginal in both studies, although the first was able to show a significant result despite this. And, of course, these are association studies, so other factors could be at play to manifest an infection or not. Both groups showed an 8-11% infection rate of some kind in their Gustilo Grade III fractures.

But the biggest issue with the second study is that, despite guidance that antibiotics should be given within an hour, the average time decreased from 3 hours to only 2:40. This is still beyond the two hour threshold to higher infection rates suggested in the first paper.

So what do I make of all of this? The UK paper is lacking the power and enough of a treatment change to be taken seriously. The San Francisco paper shows borderline results with a 2.4x increase in all infections if antibiotics are given after 2 hours.

So until we have better data and larger series, 1 hour antibiotic administration seems like a painless way to decrease the likelihood of an infection. But whether that can safely delay the time to washout remains to be seen.

For my audience members who have an interest in trauma performance improvement (PI), I have a special announcement. I’ve officially unveiled by new website dedicated exclusively to that topic.

You can find it at TraumaMedEd.com. There, you will find a growing collection of instructional videos, courses, PI blog posts, and downloadable materials. I am migrating the entire library of my trauma newsletters to the site as well.

My intent is to provide performance improvement information that you want to know about. To that end, I encourage you to sign up on the site and let me know what topics really interest you.

And if performance improvement is just not your thing, keep reading this blog!

I just released an 8-minute video detailing “When The Trauma PI Clock Starts Ticking.” Click the link or picture below to head over to the site and view it. 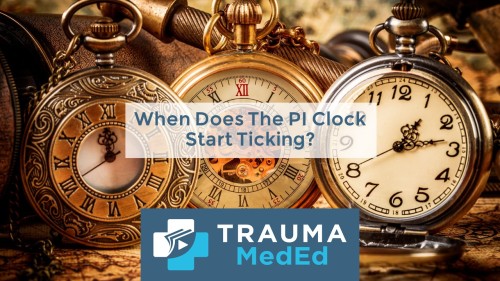