Recombinant Factor VIIa was initially approved for bleeding in hemophiliac patients back in 1999. Over the years, there has been a big move toward off-label use. There appeared to be obvious utility in using it as an emergency hemostatic agent in trauma patients. But as with many new drugs and devices, early enthusiasm slowly gave way to more balanced judgment. Reviews during the past few years are less glowing than they were early on. So what’s really been happening over the past decade?

Researchers at Stanford tapped into a large database of patient level records from 600 hospitals around the US. They identified over 18,000 uses of Factor VIIa during a 9 year time period. By the end of the study period (2008), 97% of use was off-label! Approved use (hemophilia) increased 4-fold, while off-label use increased by 140-fold. Cardiovascular surgery and trauma tied in their amount of off-label use (both about 29% of the sample).

Does it do any good? This paper can’t directly address that question, since it does not have a good comparison group. However, looking at in-hospital mortality is revealing. Use for hemophilia (FDA approved) results in a 4% mortality rate. For trauma, the in-house mortality is 33%. The worst outcomes were with patients with an aortic aneurysm (55% mortality).

Bottom line: This review details the administration of about $175 million worth of recombinant Factor VIIa over 9 years. Off-label use has skyrocketed despite a dearth of good reports that it actually saves lives. The Number Needed to Treat to prevent one additional bad outcome keeps getting larger with every study published. With a price tag of nearly $10,000 per dose, it’s getting harder to justify using it. I think we are seeing the beginning of the end (at least in trauma) for this powerful drug.

We’ve been pondering this question for nearly 30 years. In 1983, trauma surgeons at UCLA looked at a number of devices available at that time and tested them on normal volunteers. They measured neck motion to see which was “best."

Here’s what they found:

The Mayo clinic compared four specific hard collars in 2007 (Miami J, Miami J with Occian back, Aspen, Philadelphia). They found that the Miami J and Philadelphia collars reduced neck movement the best. The Miami J with or without the Occian back provided the best relief from pressure. The Aspen allowed more movement in all axes.

And finally, the halo vest is the gold standard. These tend to be used rarely and in very special circumstances. 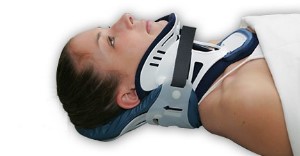 Re-expansion pulmonary edema is an uncommon event after chest tube insertion. Typically, patients have had symptoms of pneumothorax for several days, usually 3 or more. It occurs most often if a large amount of air (or blood) is evacuated at once. The patient will typically become symptomatic within an hour, with decreased oxygen saturation and subjective breathing difficulty.

Although the mechanism is not entirely clear, it appears that the small blood vessels in the lung become more permeable if they are collapsed for an extended period. Mechanical stress from rapid re-expansion further damages the vessels, allowing them to leak. This leads to oxygenation and ventilation problems if severe.

EMS in the field and physicians in the ED are faced with rapidly assigning some degree of stability to the patients they treat. What exactly are the shades of stability, and what considerations are there for each degree?

In my mind, there are three levels of “stability”:

So far, I’ve posted more than 200 items during the past year and a half. There’s a lot of good stuff in the archives, and I am going to periodically provide a list of links to them so they are not forgotten. To see a full index of the archive by subject, click here.

As always, I welcome suggestions for new posts!