In 2015, EAST published their practice guidelines for spine clearance in the obtunded blunt trauma patient. Click here to view them. They stated that a high-quality CT scan can be used to remove (clear) the cervical collar in these patients. This avoids the use of the expensive and personnel-intensive MRI clearance.

The group at UCSF used the NTDB to review the use of MRI in such patients over an 11 year period. They focused on comatose patients (GCS < 8) with an AIS head > 3 and intubation for more than 72 hours. They used logistic regression to equalize confounders while examining the use of MRI over time, before and after the guidelines were published.

The authors concluded that spinal MRI use has been increasing since 2007 despite publication of the EAST guideline.

My comments: To me, this indicates one of the following:

I suspect that it is #2. For some reason, trauma programs insist on doing it their own way despite what decent evidence shows. I think that this represents a defense mechanism to minimize the cognitive dissonance that comes with defying what is published in the literature.

I always encourage programs to borrow/steal what is already out there when crafting their own practice guidelines. Someone else has already done the work, why not take advantage of it? Typically, it’s just an excuse to continue doing things the way they’ve always been done.

This incessant reinventing the wheel becomes tiresome. And for once, I don’t have many questions or suggestions for the authors. Their evidence is pretty well laid out.

My questions for the author / presenter are:

To everyone else, I say “get over yourself and read the literature!”

Reference: Assessing the e3ffect of the EAST guideline on utilization of spinal MRI in the obtunded adult blunt trauma patient over time. EAST 2021, Paper 7.

This abstract falls into the “interesting, but how can we use this bit of information” category. We’ve known that transfusing packed red cells raises nosocomial infection rates for at least 15 years. The group led by MetroHealth in Cleveland combined forces with the Vanderbilt trauma group to re-look at their data from the PAMPer trial with respect to trauma patients.

The PAMPer trial (Prehospital Air Medical Plasma) examined the effect of tranfusion of two units of plasma in the air ambulance on mortality, transfusion need, and complications. Half of the patients got plasma plus standard care, and the other half standard care alone.

This abstract uses PAMPer trial data to examine the impact of giving any amount of blood on nosocomial infection in these patients. These infections included pneumonia, bloodstream infection, C Diff colitis, empyema, and complex intra-abdominal infection.

The group retrospectively analyzed the prospectively collected PAMPer data and used logistic regression models to test for an association.

The authors concluded that patients in the PAMPer trial who received at least one unit of blood “incurred a two-fold increased risk of nosocomial infection” and that this risk was dose dependent.

My analysis: The biggest obstacle for me to buy into this work is the enrolled patient group. Studies in which you borrow someone else’s data are always a bit problematic. You have no control over the variables, as they’ve been determined by someone else.

In this case, the dataset could only be controlled for age, sex, and ISS. But what about all the other stuff that might have an impact on infections? Things like pulmonary injury, the 20% of patients who had penetrating injury, and severe TBI patients with their propensity to develop VAP.

The odds ratios of the associations were a bit on the low side. Sure, the overall nosocomial infection odds ratio was 2.37 but the confidence interval was 1.14 to 4.94. This is very wide and it means that the odds could have been anywhere from 1.14x to almost 5x. This suggests that the study group may not have been large enough to give us a clear picture. And the odds ratio for number of PRBC units vs infection was only 1.06 with a tighter confidence interval. So even if it is present, this association is very, very weak. I like to see ridiculously large odds ratios when reviewing observational studies like this where the input data is constrained.

My final comment on this study deals with its utility. These are trauma patients. They are bleeding. We’ve known that transfusions may increase the nosocomial infection rate in critically ill patients for at least 15 years. But we will still have to give the patients blood. So what are we to do?

Here are some questions for the authors and presenter:

One final note: the patients did not “incur increased risk.” Rather, there was an association with increased risk of infection. We really don’t know if it was from the blood or something else that was not recorded in the PAMPer dataset.

Reference: Dose-dependent association between blood transfusion and nosocomial infections in trauma patients: a secondary analysis of patients from the PAMPer trial. EAST 2021, Paper 3.

All right, let’s kick of this EASTfest with an abstract from one of the Eastern Association for the Surgery of Trauma multicenter studies. This one looked at outcomes after what they term “ultra-massive” resuscitation.

There are a number of definitions for “massive transfusion” which I’ve discussed before. They are basically trauma resuscitations in which the massive transfusion protocol is triggered. The group that designed this study defined ultra-massive resuscitation as one that entails transfusing at least 20 units of packed red cells within 24 hours.

The study focused on factors predicting survival in these patients. They used multivariate logistic regression as well as another regression tool, classification and regression tree analysis (CART). They used these tools to control for age, ISS, mechanism of injury, base deficit, and crystalloid use.

The authors concluded that the failure to meet balanced resuscitation goals was the main concern for mortality, and recommended more attention to meeting ratios. 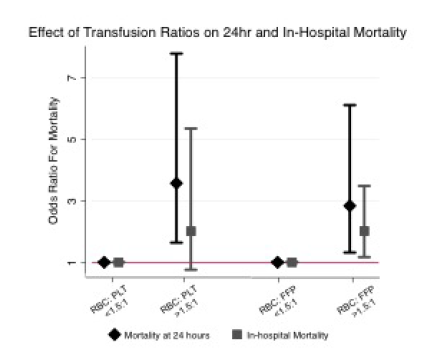 My comments: I’m not so sure I’ve learned a lot from this abstract. I think we already knew that people with severe TBI or thoracotomy don’t do very well, especially if they need that much blood.

I also worry about the heterogeneity of the population. The variables that were controlled still offer quite a bit of variability in the injuries and condition of these trauma patients. I think this will make it difficult to come to many solid conclusions when looking at something as crude as mortality.

I think there is a lot of potential in this dataset once you overcome the small numbers. I’m very interested in the authors’ presentation!

The Eastern Association for the Surgery of Trauma annual meeting starts in just 2 weeks! Keeping to tradition, I’m going to start reviewing some of the more interesting (to me) abstracts to be presented at the meeting and sharing my thoughts with you.

There are 33 regular abstracts and 17 quick shot abstracts to be presented. I’m going to focus on the regular abstracts, since there will be an opportunity to question the authors (hopefully) at the virtual meeting. Quick shots are a very brief presentation only.

Let me share how I process a batch of abstracts like this. First, I capture the pdf file with all the abstracts and open it in a pdf markup program. Adobe Reader or Acrobat have basic capabilities, but I prefer a more full-featured product so I can scribble notes and stuff on it.

Now, I go through the file looking at titles. Keep in mind I am a clinical trauma surgeon. So right off the bat I will pretty much discard any bench type research. No matter how interesting it may sound, it will be years before it may (or more likely won’t) be clinically relevant. Invariably, I will pay no further attention to these.

If the title, suggests it is an animal study, I may consider it. But probably not. The research idea had better be a very interesting or intriguing one that should definitely stimulate further thought and research. If it’s just making an incremental advance, there won’t be any clinical relevance to humans for a few more years. There are some REBOA abstracts in the current batch that fall into this category. I do keep the research concept in my mind for future consideration when I see related papers, but for now I ignore.

Now, I am left with mostly clinically relevant papers. As I read the title I ask myself:

By now, I’ve cut the number of abstracts roughly in half. That’s still too many to write about. So finally, I have to narrow down the field by ranking in order of my interest level. I fully recognize that my interests will not be necessarily be perfectly aligned with yours. But I do know my audience, and most of you share the same areas of curiosity. Unfortunately, some good abstracts will be ignored. But there is one thing you can do: look over the abstract collection yourself and let me know about specific abstracts you would like to see discussed! I am happy to oblige.

So beginning tomorrow, I’ll post the most interesting EAST abstracts in program book order. I’ll provide the author’s description and my analysis. I will also list some questions that I (and probably you) have that the authors should consider. I always make a point of notifying the authors each day when I post about their abstract so they can study the questions and potentially address them in their virtual presentation.

And as always, if you have questions, suggestions, or abstracts you would like discussed, just reply here or on Twitter. I hope to “see” you at EAST!