In my last post, I reviewed the three screening systems for blunt carotid and vertebral artery injury (BCVI). Today, we’ll look at grading them.

Only 10 years ago, it was a major production to identify BCVI. CT angiography was still in its early days, and scanner resolution and radiologist experience were major issues that impacted accuracy.

We’ve come a long way in a relatively short period of time, and current day scanners now have more than adequate resolution. It’s also more common to have a radiologist with special skills reading these studies, the neuroradiologist. For these reasons, CT angiography has become the standard for diagnosis. It is also the most cost-effective. Only in very rare cases do we need to obtain a conventional contrast angiogram.

Once the study has been obtained, it’s time to identify and classify the injury. The Denver group is also responsible for bringing us the grading system for BCVI. See the diagram below.

Here are the details:

Grade I: A mild intimal irregularity is seen. Note the abnormally narrowed area, representing a small intimal injury, possibly with a small amount of clot.

Grade II: This grade has several presentations. There may be an intraluminal thrombosis/hematoma with (left) or without (right) an intimal flap, or a flap alone (center).

Grade III: There is a full-thickness injury to the vessel with a contained extraluminal extravasation (pseudoaneurysm)

Grade IV: The vessel is completely occluded by flap or thrombus

Grade V: The artery is transected and freely extravasating 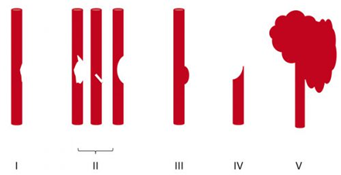 Remember, we always grade things for a reason! Ultimately, the injury grade will translate into the selection of treatment. We’ll cover that in my next post.

In my last post, I described how common we think blunt carotid and vertebral injury (BCVI) really is. Today, I’ll review how we screen for this condition.

Currently, there are three systems in use: Denver, Expanded Denver, and Modified Memphis. Let’s look at each in detail.

There is an original Denver screening system, and a more recent modification. The original system was divided into mechanism, physical signs, and radiographic findings. It was rather rudimentary and evolved into the following which uses both signs and symptoms, and high-risk factors.

The Denver group reviewed their criteria in 2012 and found that 20% of the patients who had identified BCVI did not meet any of their criteria. And obviously, this number cannot include those who were never symptomatic and therefore never discovered.

Based on their analysis, they added several additional risk factors to the original system:

The downside of these modifications is that they are a little more complicated to identify. The original criteria were fairly straightforward yes/no items. But “TBI with thoracic injuries?” Both the TBI part and the thoracic injury part are very vague. This modification casts a wider net for BCVI, but the holes in the net are much larger.

Let’s move on to the modified Memphis system for identifying BCVI. It consists of seven findings that overlap significantly with the Denver criteria. The underlined phrases indicated the modifications that were applied to the original criteria.

Interestingly, these modifications were first described in an abstract which was never published as a paper. Yet somehow, they stuck with us.

So there are now two or three possible systems to choose from when deciding to screen your blunt trauma patient. Which one is best?

Let’s go back to the AAST abstract presented by the Birmingham group this year that I mentioned previously. Not only did they determine a more accurate incidence, but they also tested the three major screening systems to see how each fared. See Table 1.

Look at these numbers closely. When any of these systems were applied and the screen was negative, the actual percentage of patients who still actually had the injury ranged from about 25% to 50%! Basically, it was a coin toss with the exception of the Expanded Denver criteria performing a little better.

If you are a patient and you actually have the injury, how often does any screening system pick it up? Oh, about one in five times. Again, this is not what we want to see.

So what to do? The Expanded Denver screen has a lower false negative rate, but the total number of positive screens, and hence the number of studies performed, doubles when it is used.

Here’s how I think about it. BCVI is more common than we thought in major blunt trauma. If not identified, a catastrophic stroke may occur. Current screening systems successfully flag only 50% of patients for imaging. So in my opinion, we need to consider imaging every patient who is already slated to receive a head and cervical spine CT after major blunt trauma! At least until we have a more selective (and reliable) set of screening criteria.

Blunt carotid and vertebral artery injuries (BCVI) are an under-appreciated problem after blunt trauma. Several screening tools have been published over the years, but they tend to be unevenly applied at individual trauma centers. I will discuss them in detail in the next section.

For the longest time, the overall incidence of BCVI was thought to be low, on the order of 1-2%. This is the number I learned years ago, and it has not really changed over time.

But how do we know for sure? Well, the group at Birmingham retrospectively reviewed every CT angiogram (CTA) of the neck they did in a recent two-year period. They did this after adopting a policy of imaging each and every one of their major blunt trauma patients for BCVI. Each patient chart was also evaluated to see if the patient met any of the criteria for the three commonly used screening systems.

During the study period, a total of 6,287 of 6,800 blunt trauma patients underwent BCVI screening with CTA of the neck. They discovered that 480 patients (7.6%) were positive for BCVI!

This is a shocking 8x higher than we expected! Why hasn’t this been obvious until now? Most likely because we were previously only aware of patients who became symptomatic. Luckily, many of these patients dodge the proverbial bullet and never exhibit any symptoms at all.

So why should we be worried? This is one of those clinical entities like blunt thoracic aortic disruption that potentially has terrible consequences if ignored. Although the number of patients who develop sequelae from their BCVI is small, suffering a stroke can be catastrophic.

Should we perform a screening study for all blunt trauma patients? Seems like overkill, or is it? Is there any way we be more selective about it?

In the next post, I’ll review the three current screening tools  used to determine which patients should receive CTA, and how good they are.

This post will kick off a series of posts on BCVI. What is that, you ask? There seems to be some confusion as to what the acronym BCVI actually stands for. Some people believe that it means blunt cerebrovascular injury. This is not correct, because that term refers to injury to just about any vessel inside the skull.

The correct interpretation is blunt carotid and vertebral artery injury. This term refers to any portion and any combination of injury to those two pairs of vessels, from where they arise on the great vessels, all the way up into the base of the skull. Here’s a nice diagram: 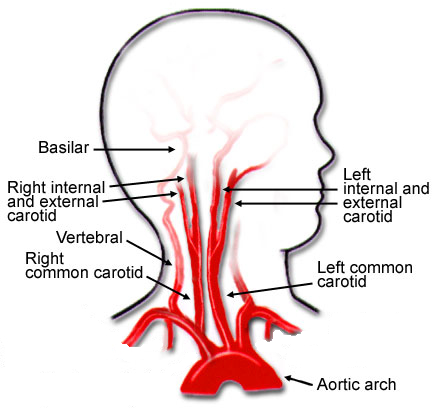 Note that we will be excluding the external carotid arteries from this discussion, since injuries to them do not have any impact on the brain. They can cause troublesome bleeding, though.

These arteries are relatively protected from harm during blunt trauma. But given enough energy, bad things can happen. Fortunately, injuries to these structures are not very common, but unfortunately many trauma professionals under-appreciate their frequency and severity.

Over the next four posts, I’m going to provide an update on what we know about BCVI. I will try to tease out the true incidence, review the (multiple) screening systems, and discuss various ways to manage these injuries.

In the next post, we’ll explore the incidence of this injury. Is it truly as uncommon as we think?

Readmission of any patient to the hospital is considered a quality indicator. Was the patient discharged too soon for some reason? Were there any missed or undertreated injuries? Information from the Medicare system in the US (remember, this represents an older age group than the usual trauma patient) indicates that 18% of patients are readmitted and 13% of these are potentially preventable.

A non-academic Level II trauma center in Indiana retrospectively reviewed their admissions and readmissions over a 3 year period and excluded patients who were readmitted on a planned basis (surgery), with a new injury, and those who died. This left about 5,000 patients for review. Of those, 98 were identified as unexpected readmissions.

There were 6 major causes for readmission:

About 14% of readmissions were considered to be non-preventable by a single senior surgeon. Wound complications had the highest preventability and CNS changes the lowest. Half occurred prior to the first followup visit, which was typically scheduled 2-3 weeks after discharge. This prompted the authors to change their routine followup to 7 days.

Bottom line: This retrospective study suffers from the usual weaknesses. However, it is an interesting glimpse into a practice with fewer than the usual number patients lost to followup. The readmission rate was 2%, which is pretty good. One in 7 were considered “preventable.” Wounds and pulmonary problems were the biggest contributors. I recommend that wound and pulmonary status be thoroughly assessed prior to discharge to bring this number down further. Personally, I would not change the routine followup date to 1 week, because most patients have far more complaints that are of little clinical importance than compared to 2 weeks after discharge.