The September issue of the Trauma MedEd newsletter is now available to everyone!

In this issue, get some tips on:

Or copy this link into your browser:
https://www.traumameded.com/courses/practical-tips/

This newsletter was released to subscribers a few weeks ago. If you would like to be the first to get your hands on future newsletters, just click here to subscribe! 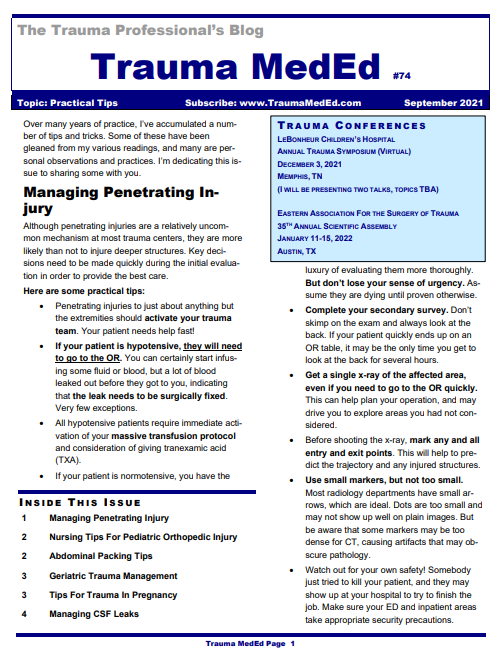 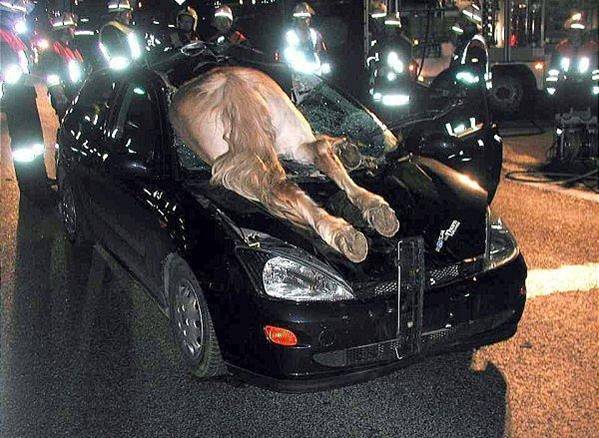 Over the years, we have slowly gotten wiser about solid organ injuries (SOI). Way back when, before CT and ultrasound, if there was a suspicion a patient had such an injury you were off to the operating room. We learned (from children, I might add) that these injuries, especially the minor ones, were not such a big deal.

However, we routinely admit adults and children with solid organ injury of any grade. Many centers have streamlined their practice guidelines so that these patients don’t spend very long in the hospital, but most are still admitted. A number of researchers from Level I pediatric centers in the US got together to see if this is really necessary.

They combed through 10 years worth of TQIP data for outcomes and timing of intervention in children with low-grade (grades 1 and 2) solid organ injury age 16 or less. Children with “trivial” extra-abdominal injuries were included to make the conclusions more generalizable.  Penetrating injuries and burns were excluded, as were those with “risk of hemorrhage” or need for abdominal exploration for reasons other than the SOI. The risk of hemorrhage was defined as a pre-existing condition or other injury that made it more likely that a transfusion might be necessary for other causes.

The authors concluded that practice guidelines should be developed for adult centers caring for children to decrease the number of possibly unnecessary interventions, and that it may be feasible to manage many children with low-grade SOI outside of the hospital.

Bottom line: This is an intriguing study. The admission length and silly restrictions like bed rest, NPO, and multiple lab draws are finally approaching their end. Although this paper does have the usual limitations of using a large retrospective database, it was nicely done and thoughtfully analyzed.

It confirms that adverse events in this population are very uncommon, and that adult centers are still too aggressive in treating children like adults. The recommendation regarding practice guidelines is very poignant and this should be a high priority.

Individual centers should determine if they have the infrastructure to identify low-risk children who have reliable families and live in proximity to a hospital with a general surgeon, or better yet, near a trauma center. Hopefully this study will help accelerate the adoption of such guidelines and practices, moving treatment for many children to the outpatient setting.

Hospitals are increasingly relying on a hospitalist model to deliver care to inpatients on medical services. These medical generalists are usually trained in general internal medicine, family medicine, or pediatrics and provide general hospital-based care. Specialists, both medical and surgical, may be consulted when needed.

Is there a benefit to adding medical expertise to the trauma service? A few studies have now looked at this, and I will review them over the next few days. The Level I trauma center at Christiana Care in Wilmington, Delaware embedded a trauma hospitalist (THOSP) in the trauma service. They participated in the care of trauma patients with coronary artery disease, CHF, arrhythmias, chronic diseases of the lung or kidneys, stroke, diabetes, or those taking anticoagulants.

The THOSP was consulted on appropriate patients upon admission, or during admission if one of the conditions was discovered later. They attended morning and afternoon sign-outs, and weekly multidisciplinary rounds. A total of 566 patients with hospitalist involvement were matched to controls, and ultimately 469 patients were studied.

Bottom line: This paper shows some positive impact, along with some puzzling mixed results. The decrease in mortality and many complications is very positive. Was the increase in ICU transfers due to a different care philosophy in medical vs surgical personnel? And the failure to decrease the number of specialty consults was very disappointing to me. I would expect that having additional medical expertise on the team should make a difference there.

Was the THOSP really “embedded” if they were not involved in the regular daily rounds? In this case, they were present only for handoffs and for weekly multidisciplinary rounds. I believe that having them on the rounding team daily would be of huge benefit, allowing the surgeons and hospitalists to learn from each other. Plus, there should be a benefit to the residents in a Level I center, helping them broaden their ability to care for these complicated patients.

One of the most common injuries encountered by trauma professionals is blunt head trauma, and it’s one of the leading causes of death in young people. Keeping the level of intracranial pressure (ICP) within a specified range is one of the basic tenets of critical neurotrauma care in these patients. Most trauma centers have sophisticated algorithms that provide treatment guidance for various levels of ICP or cerebral perfusion.

The vast majority of patients with severe head injuries are transported to the hospital in some type of ambulance. Obviously, the exact ICP level is not known during transport because no monitoring device is present. We can sometimes infer that ICP is elevated if the patient has a Cushing response (wide pulse pressure and bradycardia) or unequal pupils. But for the most part, we assume that ICP is in a steady state during the ambulance ride.

But here’s something I never considered before: can ambulance acceleration or deceleration change the ICP through shifting of the brain or cerebrospinal fluid?

Patients are generally loaded into ambulances head-first, with their feet toward the back door. Frequently, they must be positioned supine in consideration of possible thoracic or lumbar spine injury. This position itself may lead to an increase in ICP. But what happens when the ambulance is hitting the brakes as it approaches a light or stop sign? As the patient’s weight shifts toward the top of the head, so does the CSF, spinal cord, and brain. Couldn’t this, too, increase ICP?

The anesthesiology group at the Erasmus Medical Center in Rotterdam, Holland performed a very novel study to assess this very thing. They recruited twenty participants in whom they evaluated ICP in various positions during acceleration and deceleration.
No, the subjects did not have an actual invasive ICP monitor inserted.

The authors used a novel way to infer pressures: optic nerve sheath diameter (ONSD). The optic nerves are direct extensions of the brain, and CSF travels freely in the nerve sheath. As ICP rises, the diameter of the nerve sheath increases. The subjects were fitted with a special helmet with two devices mounted on it. The first was a 7.5 Mhz ultra-sound probe focused on the back of the eye. The second was an arm with an orange dot on the end. This was adjusted so that the ultrasound probe was pointing at the optic nerve sheath when the other eye was focused on the dot. Subjects just watched the dot and measurements streamed in! Crude but very effective. 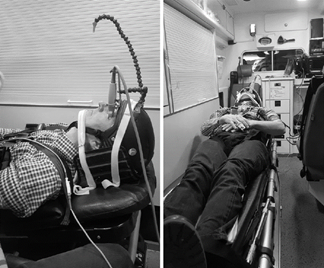 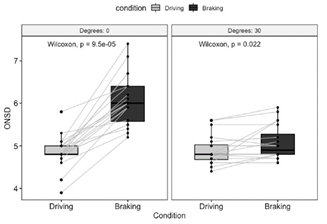 The left block shows the increase in size of the optic disk with braking while supine. The right one demonstrates that this effect is neutralized by elevating the head 30º.

Bottom line: This is a small, simple, and creative study, yet the results are very interesting! It is clear that optic nerve sheath diameter increases significantly during deceleration in patients who are supine. And this effect is eliminated if the head of bed is elevated 30º.

Unfortunately, we have no idea how the change in ONSD corresponds to absolute values of, or relative increases in, ICP. Does a change of 1.2mm indicate a 5 torr increase in ICP? A 5% increase? Is it proportional to the absolute ICP? We just don’t know.

But the data is clear that a measurable change does occur. Until better data is available, it may be desirable to transport patients with serious head injuries with the head elevated to 30º if there are no concerns for lower spine injury. Or failing that, make sure the driver does not have a lead foot!